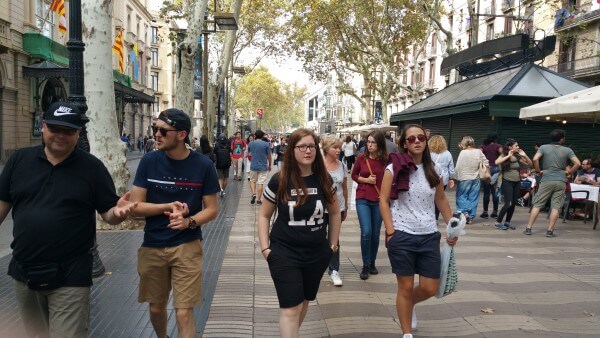 Yes travel is one of the great joys of life, but sometimes things go wrong. Those travel woes usually make the best dinner party stories, but at the time one can only laugh, cry, take action or all of the above.

I made my first international trip at the age of 25, travelling overland through South East Asia with a female friend. Our experiences were many and varied but the one that stays most clearly in my mind was a train trip in India. Train travel in India is ‘interesting’ at the best of times, but this time there were floods and part of the tracks were closed. At the aptly named Lucknow, we were told to leave the train we had booked on, and were shoehorned into another already full train. Needless to say any seat bookings went out the window. A kindly gentleman secured two seats for us, but then the other men in the carriage demanded that we go into the women’s sleeper compartment where Alana and I found ourselves sharing with 4 other women. Rightly concerned about the safety of their possessions, these women insisted on having the windows and the door locked and I suddenly discovered what it felt like to experience claustrophobia. I recall leaving the compartment and standing on the small platform between carriages, considering the option of jumping off into the flooded fields surrounding the tracks. I didn’t do that and I did survive the night but it was my first real taste of the travel woes.

Travel woes don’t have to be major (although they can be), but they are all too common, and even the best planned travel can still hit snags. Here are a few more stories from some of our favourite travel bloggers.

Travel difficulties in a wheelchair

Sandy from Tray Tables Away

My plans to travel to Poland, Hungary and Vietnam were somewhere thwarted when my travelling companion broke her foot in a motorbike accident on Mykonos. We were determined to continue however, at least for the European content and had a couple of great but challenging weeks navigating trains, planes, cobblestone streets and tram tracks with a wheel chair. Still very worth while and don’t regret any of it.

However I pulled the plug on Vietnam. Asia is tricky enough at times let alone with crutches and a wheelchair and my friend’s doctor in Athens and her insurance company were both happier if we headed home to Australia.

Which would have been fine, but it was July and flights were full. So after a lot of research I thought it was a miracle that we had managed to find a flight from Bangkok to Australia that easily connected with our original flight from Budapest. Except it didn’t ! It was one of those flight that was stopping to refuel and shift a few passengers but those booked through could not get off with their bags. Many hours of tears and begging and eventually the lovely guys at Qatar in Budapest found us a flight only a few hours later that had the itinerary we needed – BUT only 2 seats left and we needed our passports which were back in the apartment !

I pushed that wheelchair like we were trialing for the Winter Paralympics. Hook turns, backward lunges, sidewalk shuffles, ramp rage – I was on fire ! But, sadly by the time we got the necessary documentation the seats were gone. The only thing for it was to head to airport and commence more begging, crying and praying to false idols.

Well, long story short we got on with seconds to spare. We were so grateful I kissed the check-in staff, did the wheelchair happy dance and cartwheels all the way to the check in gate where, OH NO, our boarding passes were taken off us !

And replaced with Business Class ones !  Talk about from the sh*t house to the penthouse. What a day that was ( and we got home safe and sound and are now very big fans of Qatar).

When we arrived in Paris in 2014, we’d been on a trip which had involved a whistle stop tour travelling around 9 countries in Europe. When one of our group, a 22 year old who carried a handbag, said she’d been robbed on the metro, we in an overly smug response, kind of raised our eyebrows, patted our sturdy but unfashionable ‘bum-bags’, offered condolences and help, but thought : ‘Hmm, you need to be more careful with your valuables.’

The next morning we hopped onto the metro. It was crowded and we had to stand up. We started chatting about how wonderful bum bags are and how safe they are at the front of your body, and how glad we are not young anymore (meaning aren’t we wise!). Our eyes were locked in conversation.

We changed trains, and got into a less crowded carriage.

I looked down at Dave’s bum bag and in dismay said: “Oh you are dotty Dave, you didn’t zip up your bum bag.”

He went ashen white and said: “I’ve been pick-pocketed. Silently. I didn’t feel anything. I’ve been violated! Did you see anything?”

I hadn’t seen anything and we figured it must have happened as we got off the first train in a gaggle of people. Perhaps the pick pocketer had even been listening to our smug conversation about how careful we were with our valuables!

Luckily Dave only had one credit card and a small amount of cash on him, but it had all gone. We had to hot foot it back to the hotel (me practically hugging my bum bag) to do all the necessaries, and this event completely ruined our impressions of Paris.

Travel problems can begin before boarding your flight

Kathy from 50 Shades of Age

Have you ever booked a flight online and then all of a sudden the website freezes and you have completed your booking but don’t know if it has actually gone through? Years ago this happened to me when I booked a flight to Thailand.

On the actual day of the flight we arrived at the airport after a two hour drive, and proceeded to the check-in counter, only to discover that we never had a booking on the flight! You can imagine how devastated we felt.

Lesson Learnt – To board a flight you need an E-Ticket not just a booking confirmation from the airline and it also pays to check that the credit card payment has gone through! This was an absolute catastrophe but fortunately we were able to get on the flight and enjoy our holiday in Thailand.

The first sign of our troubles in Bangkok in 2010, came as our taxi sat gridlocked in traffic for a long twenty minutes and we learned about the Red Shirt Political Protests and Government response.

We had to choose between transferring to a motorbike or walking to our hotel. With luggage and bulky market purchases on board, we uneasily chose the latter.

Trudging silently into the boiling afternoon, machine gun fire erupted ahead of us and all hell broke loose. Backtracking we diverted down a street toward the Chao Phraya River.

There, a miracle in the form of a group of Thai teenagers appeared. Gathering around our map they devised an alternate river/canal route.

Ambulance utilities off-loaded two bloodied patients and with drips held high we all hurried toward the river. It was bizarrely reminiscent of a Mash Television Episode.

The crowd carried us onto the ferry and at the designated stop we jumped off, crossing a busy riverside road to find the canal.

Threatening helicopters flew close overhead, blasting loudspeaker warnings and we heard loud deep booms. It was tear gas and we were to discover how, with burning eyes, nose, mouth and throat it is practically impossible to breathe.

I couldn’t believe we actually found our hotel safely. It was without a doubt the scariest event of my life.

After Jan Robinson’s story this seems so trivial…

We were having a wonderful time in Barcelona and feeling very pleased that we had successfully negotiated the general strike after the Catalonia’s referendum on independence. We had pre-booked visits to several museums and art galleries including the Fundacio Joan Miro, located a shortish but steep walk up from our Hotel. We decided we had time to walk and off we went. Part way up the hill (Google Maps in hand) we stopped near some parkland to check our bearings and as it was hot, took advantage of the shade of one of the trees. Suddenly I felt a great plop of birdshit land on me and it was everywhere, in my hair, on my tee shirt, down my arm. And it smelt foul, this definitely wasn’t the blue bird of happiness.  I may have shrieked because two other passers by came to our aid. One began using water and tissues to try and clean me up, at the same time pointing out that Rowan was also hit by the same bird. She suggested I work on cleaning him up whilst she helped me. It was such a lovely idea but every time I tried I simply gagged. We ended up going back to our hotel (me breathing through my mouth) having showers, getting changed and catching a taxi to the gallery where we successfully pleaded to be allowed on a later tour than originally booked.

Why do I tell that story? Well, for me, the kindness of strangers can be a common experience when travelling and that adds richness to travel. Be it the man who helped my friend and I secure seats on a crowded train, the Thai teenagers who helped Jan in Bangkok, the Qatar staff who upgraded Sandy and her friend or the kind strangers who tried to help with the birdshit.  The best in people often comes out in those situations.

Do you have a story of travel woe to share? If so do you dine out on it? Have you experienced the kindness of strangers when travelling?