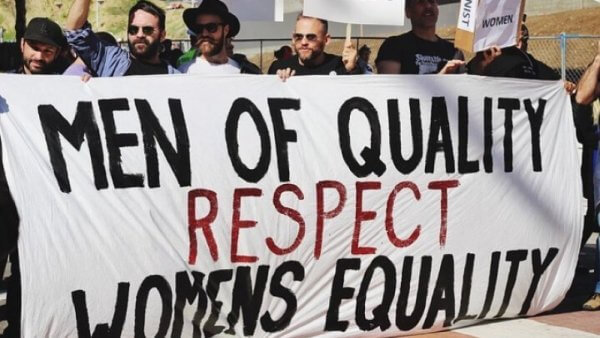 Gender roles in Australia are changing and being challenged within families. Australian men have an opportunity to embrace this change and move forward, with renewed strength, in partnerships that have more to do with equality and the commensurate application of skills, different as they may be, and less about a stereotype of “being a man”.

Years ago, I am pleased to say, a female neighbour of mine announced at a party in our suburb that I was a  “kaftaned little wimp, who would prefer to spend more time in the kitchen than down at the pub with the boys!’ Now that may have been amusing for some of the blokes at the party, but – perhaps contrary to expectations – most of the women at that party, who didn’t already know me became, shall we say, curious about who ‘that’ person was.

The statement was true. I established a long time back I was interested in food and that I wanted to learn how to cook to feed myself and others. And yes, there are still men I know who “don’t cook” as though it was a social crime which offends their manhood, well they might operate a BBQ but that’s it. Since leaving home, I have been pretty independent, in fact I reckon if I had ever taken washing back to my Mother, she would have been aghast! We do have a friend who once turned up for the weekend and asked Jan to wash some of his clothes, fair to say she was aghast as well.

All that aside, is it just me, or have I seen little real advance in “gender equality” since I first read “The Female Eunuch” in the 1970s and realised it was a book about the need for social change? Change which has not been comprehensively embraced in our society nearly 50 years on.

The current status seems little improved, for either gender

Maybe I’m more conscious of it, maybe I am just hearing more, but our statistics on issues like the number of women on boards, on domestic violence, on wage and superannuation inequity , an acceptance of “that’s just the way things are” … and the list goes on, is quite staggering.

I’m not arguing that ALL things should be equal, but where gross inequality seems to be a part of entrenched (usually misogynistic) values, rather than for logical reasons, then I begin to bridle. When that thinking leads to inequity which is harming society and we are failing to utilise half of our gene pool nearly as effectively as we could, this comes with a real economic, as well as social, cost. We are simply not doing things as well as we could.

If you look at rural suicides you readily understand that in many cases, men have felt mightily oppressed through no fault of their own. They feel (undoubtedly amongst other things) that they have let people down and simply can’t cope. This is appalling, and I do know what hopelessness feels like. One of the tragedies of this situation may be that the person they felt they had let down most, could have been more of a support than they were given credit for or allowed to be. Is this a matter of being a bit lost and ignored  or are we men simply failing to open-up and fully embrace the value in the partnership we have with our women (be that friends or partners)?

I don’t believe this is men just not getting a fair go.  Is it frustration at the way society is?

Possible ways forward for getting the best for both genders

Is a man’s role and what has given some men their sense of pride being challenged, or just changed? Is a potential reason for men losing voice more about a deluge of information, things and stuff that attacks all of us daily? Are we as men losing relevance or are new roles emerging that demand that “our place” in society necessitates a more mutually supportive rather than necessarily a leading role?

I don’t think this is about competition, it’s about role expectations, personality and overall social cohesion.

Whilst not a major fan of direct positive discrimination policies delivering other than artificially skewed outcomes, I do believe there is a place for something that redresses statistics like this one: “Superannuation for those aged between between 60 and 64: Men will need … more than double the average balance, and women more than five times the average [See ”superannuation inequity” reference link above.]

Some “contrived” acts of leveling the playing field are IMHO very productive. In that respect we do put our money where our mouth is.

The inequities mean single women in particular have not as much to enjoy from the fruits of their labour in retirement, and is a sad reflection on our society. In the end, this inequity is placing a greater future burden on taxpayer funded resources. The impact is being seen in the increasing number of older women who are homeless.

As sensitively as possible, I ask: is a traditionally dominant “alpha male” role in general, still appropriate? And if not (I would suggest not), why does our society often persist in trying to make personal relationships a “stand behind me, not stand beside me” situation, and what can we do to change this?

There is a lot out there that mitigates against life being simple in any relationship and the supposed necessity for two employed partners to be working full time can lead to all sorts of destructive pressures.

Having been in situations myself where I was definitely not the main breadwinner, and seeing many other similar situations around me working perfectly well, I am wondering what is it in the psyche of some males that makes this situation so difficult to deal with, and creates so much potential resentment?

Clearly, we need to start gender equity education as early as possible, and keep talking about it and addressing the dreadful consequences of gender inequity. We need to call out some male stereotypical behaviour for what it often is, bullying (recognising that women are not exempt from that charge).

This needs to start with a lot more males engaged. Perhaps “walk a mile in my shoes” is appropriate, because if we keep blundering on as we are, our western societies will neither progress nor aspire to, the greatness humanity can offer.

The references below carry trigger warnings and may be confronting:

What has been your experience of inequity? Is redressing our situation up to men, women or both, or are we waiting for the Government or divine intervention? How do we start a positive conversation in a mutually supportive way for everyone?