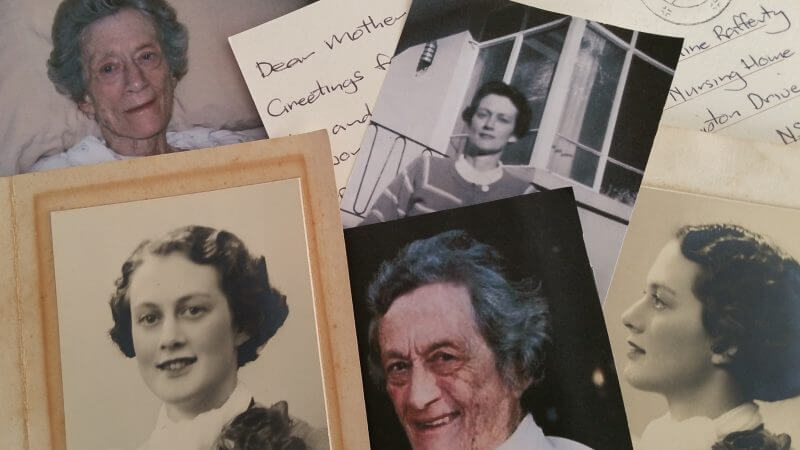 Mother was raised on an orchard in the Huon Valley, Tasmania and like many who grew up in the 1930’s depression, she was a determined, single-minded, independent woman who never had a full time job. Her education was limited; not finishing high school. Married just before World War II, Mum spent time in Canberra and in Brisbane working for the Americans.

Aside from the usual things, I never noticed her as a fellow human being; meals happened, she did things, darned socks, made and repaired clothes … all those household/mother things. I remember the two day drives, just with her, from Melbourne to Canberra and back to stay with cousins. The Hume highway was dirt most of the way in the early 50’s  … we were in a little Standard ‘8’. When I was quite young she disappeared for a few days and went on a thing called the Mobilgas Trial; I realised that Mum had a sense of adventure.

My parents moved away from the 20-year home in Canberra to the far north coast of NSW. Dad had retired (hah …. my Father could never stop work!). Mum continued to work part time but a gammy hip stopped her. In later years, the garden and her much loved cups of tea were as much as she did.

Hardworking, relatively independent (just the way my parents rolled) and knowing what she wanted, Mum did not like surprises much, or change.

My point in telling you all this, is to ensure you appreciate that we all have our quirks, ways that are sometimes endearing and others perhaps downright infuriating, and so do our aging parents.

As we become a little less flexible ourselves, we may see frightening reflections. “OMG, I sound just like my father!” Take a step back to appreciate that many of us have had some wisdom, perhaps painfully gained, from these same parents. The quirks may be similar in many of our parents, manifesting themselves in different ways. Sometimes you see them coming, sometimes you don’t, but if we reach their age, I fancy things may not be that different.

Mother did not want to get old or have much to do with the Government. A suggestion was made in her early 70’s that she should apply for the old age pension, the response was: “What rot! I don’t need that”. Mother’s investment income was one third of the OAP. One of my all-time favourite people, Saint Betty, a ‘younger’ neighbour, told my Mother she “had someone coming to see her from the RSL“. Mum found she was entitled to a pension due to Dad’s war service. Job done, thank you Betty. More money for Mum to spend, on someone else.

Time came to have the “driving” discussion; independence and Mother’s love of driving could have made this a harder task, but reason prevailed. Some refusals from the elderly to give up driving can leave devastating consequences. BTW I don’t believe that intransigence in the face of logic necessarily sets in at any particular age!

Mother was prudent with her money. She saved money and stuff, like plastic bags! Unbelievable. Yes, I could borrow money but she was as demanding as a bank manager. On the other hand, a door-to-door sales person … well that was a different matter. Mum had the world’s most expensive vacuum cleaner, a carport that cost as much as a small house and signed up for things she didn’t need. What other expenditure may have been attributed to a smiling face and glib tongue at the door I’ll never know, because my dear Mother was secretive, particularly about money!

This secretiveness nearly brought me undone. Documentation and declarations of financial status needed to be prepared to finalise a high-care facility and pension arrangements. I was “tipped off” about some monies owing to Mum; these loans significantly changed her financial status. Suddenly I had to interrogate my own Mother about these unmentioned loans to a “friend”. Effectively she had been conned out of tens of thousands of dollars, over several years, by this dodgy borrower who been grooming her for that purpose for years. I needed to address the “loan” to avoid potential legal action against me. The matter was resolved, most unsatisfactorily, I moved on.

The issue of “friends” in later life can be perplexing and sometimes painful, but also can have the blessing of comfort, company and purpose. Tread carefully in these matters.

Before moving into care, some well-meaning folk decided to provide Mum with their own advice. This was done with a totally misguided misunderstanding of Mum’s disposition to life; apparently she had millions to spend, most of it under the bed! The immediate and broader community our parents live in can make a great deal of difference to their and your peace of mind.

Due to Mother’s continued mental agility right to the end, it was possible to discuss and reason over most matters affecting her. Conversations were sometimes difficult, like going into care; I remain very grateful for having the ability to ensure Mum had her say rationally, quietly but very firmly.

In the final months I received calls from the care facility medical staff:

“Your Mother is depressed!”

“She says she wants to die.”

Me: ”She is 84, bed ridden, doesn’t read, listen to the radio or watch TV because she is no longer interested, can’t go outside to pick a flower or watch the birds and can’t have a cup of tea.”

Mother was ready to go, not depressed, over life and was perfectly rational.

At the end Mother could not eat. One of the options was to “keep her comfortable” where she was. We did that.

The end came peacefully and I remain very thankful for my Mother’s prudence and love.

Have you needed to have sensitive discussions with your parents? Have you found that easy or difficult? Do you see some of your parents’ personality in your own behaviour?